THE FOREST: A PLACE OF REGENERATION AND WORK.

This is exactly how lumbering expert, forester & district hunter Robert Brunnauer describes the forest habitat. He has been a satisfied EPSILON customer for 15 years and couldn't be happier with his current EPSILON S120R.

As a lumbering expert, you're on the job in all kinds of weather conditions. Whether rain, sun, wind or snow - the workplace is the unpredictable outdoors. You need a strong, reliable partner to cope with all conditions.

"I have the S120R on this machine for 5 years now, it has a lot more power and is simply one of the best cranes available from EPSILON," says Robert Brunnauer. He decided to become self-employed 30 years ago and has been pursuing his passion, working in and around the forest, on a daily basis ever since. With his successful lumbering company, the Salzburg native relies on quality: He has been using EPSILON cranes for more than 15 years and really appreciates their high performance.

Roberts working day normally starts very early in the morning, as a farmer and also as a district hunter. The forestry work follows. After filling the tanks and adjusting the machines, it's time for the forest. The working days usually stretch until late in the evening, usually five days a week - except in strict periods, it can even be seven days a week.

A really hard duty was in winter of 2019, says the experienced forester.  For Robert, that winter was one of the most exciting times in his career. Huge amounts of snow had to be removed at that time, but this was no problem for Robert Brunnauer and his team thanks to optimal and flexible equipment. They were in action day and night, from clearing roads to freeing trees from the masses of snow. Thanks to their machines and the appropriate, powerful superstructure, the challenge set by Mother Nature was successfully met. 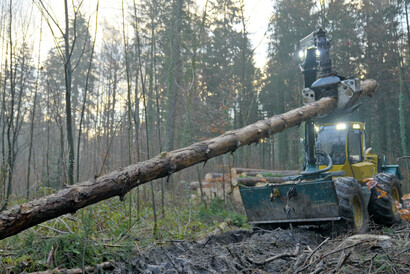 The EPSILON S120R is a highlight for Robert. In his entire time as an EPSILON customer and crane specialist, he can report no major repairs - for him, clearly a sign of the high quality. On his S120R, he also particularly likes the FG57X grab, the biggest EPSILON has to offer. "The grapple is a perfect fit for me because I have a huge capacity. I can carry five logs at a time and transport tons of branches. It can be used in so many ways, and that's why I wouldn't want any other," says the lumbering expert enthusiastically.

With the help of the EPSILON crane, the operation in the bark beetle-infested forest on the outside of Salzburg was handled effortlessly. The damaged wood, which had been under observation for some time, was quickly felled and cut to the commissioned lengths by Robert and his team, so that it could be quickly further utilized.
Since the infested objects were large, overstrength trees, a powerful crane model was indispensable.

When the work is done, he puts the big machine aside and walks through the forest with his dog. He sees the forest not only as a place to work, but also as a place to relax and hunt. The peace and quiet of hunting as district hunter give him the necessary balance after an action-packed day.

PALFINGER is an international technology and mechanical engineering company and the world's leading producer and provider of innovative crane and lifting solutions. With over 12,600 employees, more than 30 manufacturing sites and a worldwide sales and service network of around 5,000 service points, PALFINGER creates added value from the challenges of its customers. PALFINGER is consistently continuing on its course as a provider of innovative, complete solutions that deliver increased efficiency and better operability, while leveraging the potential of digitization along the entire production and value chain.

PALFINGER AG has been listed on the Vienna stock exchange since 1999, and in 2021 achieved record revenue of EUR 1.84 billion.

For further information please get in contact with us: emea-marketing@palfinger.com