PALFINGER IN THE SPOTLIGHT ON CHINA'S MISSION TO THE MOON

IN THE EARLY HOURS OF DECEMBER 17, 2020, CHINA'S MOST AMBITIOUS AND CHALLENGING ADVENTURE IN SPACE TO DATE CAME TO A TRIUMPHANT CONCLUSION. THE FLOODLIGHTS AT THE SITE ILLUMINATED NOT ONLY THE SPACE PROBE ITSELF, BUT ALSO THE PK 19000 MOUNTED ON AN ALL-TERRAIN VEHICLE. THE LOADER CRANE ENSURED THAT THE PROBE WAS RECOVERED SUCCESSFULLY IN EXTREME TEMPERATURES OF LESS THAN -30° CELSIUS.

What transpired on that morning of December 17 in the barren, snow-covered steppes of Inner Mongolia was undoubtedly something historic. After China sent its first man-made satellite into space in 1970, thereby heralding the dawn of the space age in the country.

Fifty years later, the robotic Chang'e 5 mission has become the first expedition since 1976 to bring samples from the Moon back to Earth. This makes China the third country to accomplish this feat, after the United States and the former Soviet Union, and the only nation to land successfully on the Moon in the 21st century. In fact, it is already the third time it has done so as part of the Chang'e missions, named after the mythical Chinese goddess of the Moon and begun 20 years ago.

This was a challenge of historic proportions for PALFINGER and its loader crane as well. "Although PALFINGER loader cranes have been supporting crewed space missions since 2003, from Shenzhou 5 to Shenzhou 12, it's not every day that you get to write history," said Lim Ting Yong, Marketing Manager at PALFINGER Asia Pacific. The entire undertaking unfolded in record time with clockwork precision. Starting with a textbook separation and continuing with the landing on the Moon on December 1, the collection of samples on the Mons Rümker volcanic plain, the relaunch from the Moon's surface and the process of docking with the orbiter and finally undocking of the return capsule at an altitude of 4,828 km and finally the landing back on Earth, the whole process took not even three weeks. Meanwhile, as the footage broadcast on state television showed, the recovery teams reached the capsule less than an hour after it had touched down in Inner Mongolia.

That may have marked the end of the mission as far as outsiders were concerned, but it was time for the PK 19000 to shine, experiencing something of a baptism of fire in these extreme conditions. In heavy snow on the night of December 17, it once again demonstrated its robustness and reliability. A journey full of bumps and extreme working conditions with ambient temperatures of - 30 ° Celsius could not affect the operational performance of the lifting solution. With precisely coordinated procedures and outstanding stability, the loader crane successfully secured the recovery of the space probe and, in doing so, slotted in the final piece of the puzzle to make this space expedition a resounding success.

A GREAT STRIDE TOWARD A COLLABORATIVE FUTURE

Particularly at a time when space travel is regaining attention among the global public thanks to projects such as Elon Musk's SpaceX, the Chang'e mission is enormously significant. Sources in the space sector also regard it as especially positive that the planned Chinese lunar research station, which is one of the primary objectives for future Chinese lunar exploration, is to be built in an open and collaborative way. This also confirms the testimony of Wu Yanhua, the deputy head of the Chinese space agency (CNSA) "In accordance with international cooperation conventions [...] we will share [our lunar samples] with the relevant countries and scientists overseas." 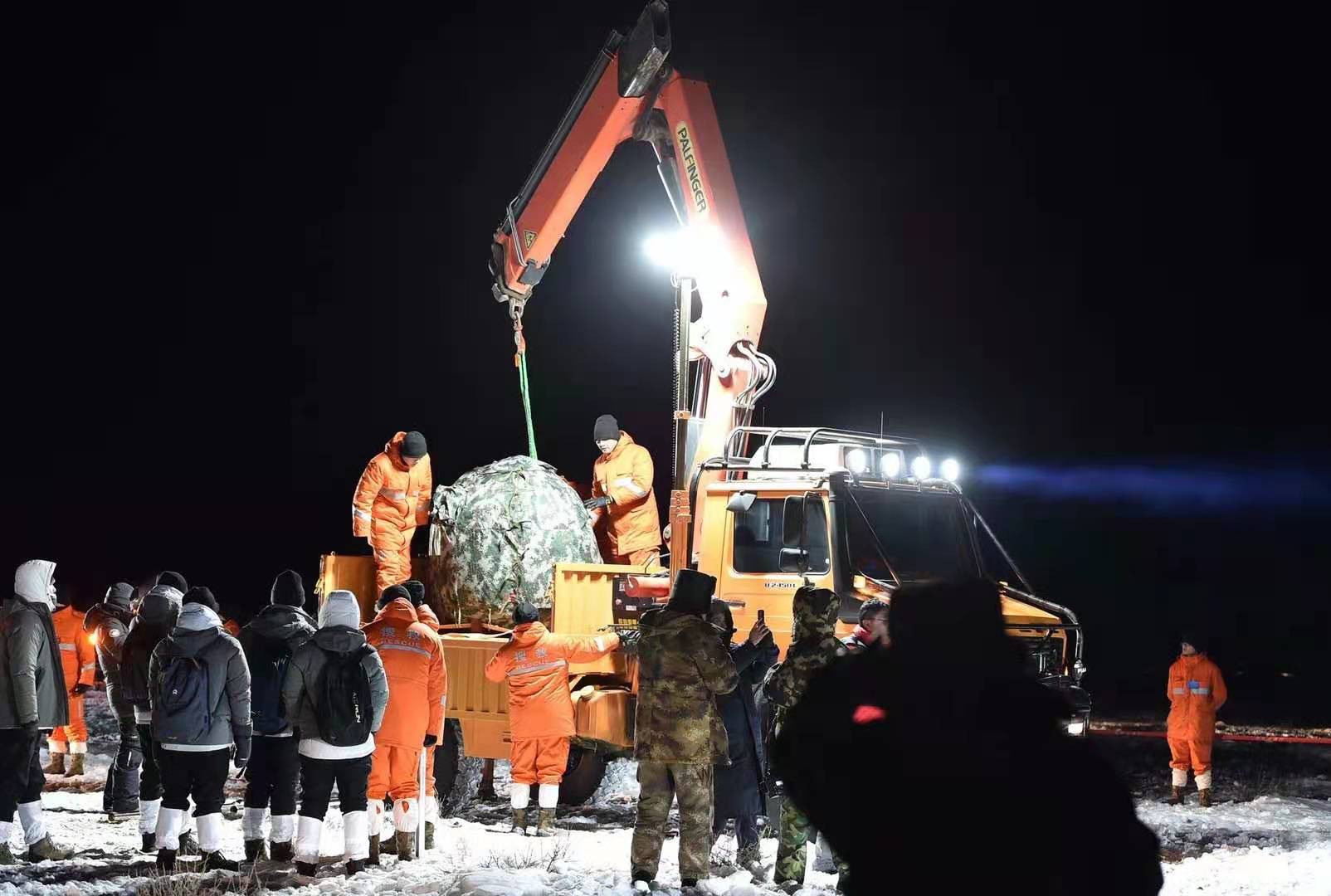