Hakan Peterson, President of Palfinger Liftgates, says, “In every aspect of my life, what drives me more than anything is to always strive to do something better than I did yesterday.” His philosophy has pioneered many avenues in the US liftgate market, raised the bar in the industry and led to a significant company milestone. January 3, 2018 marked the 25th anniversary since the California-based company opened their doors in 1993.

Peterson grew up farming in a small community in Sweden, and when he was very young, he took over the responsibilities of equipment upkeep from his father. He always had an interest in equipment and the mechanics of it – starting a career in liftgates was nearly in his blood. While Peterson’s career began in his home country, he transferred to the USA in 1985 to assist with technical service. Using his technical background to slowly ease into liftgate sales, Peterson soon moved to Los Angeles and in 1991 was approached by German-based MBB. He would lead their US market entry, setting up the first location in the backyard of their competitors located in the Los Angeles area. As a two-man operation, the product offering began with only three Cantilever Lift models in 3300, 4400 and 5500 lbs. catering to the Los Angeles movie studio market and Paper Distribution companies. At the end of the first year, together with 2 part-time employees, MBB delivered 65 units in the US. The following year, the first Under Slider lift was introduced and nearly 200 units were delivered. “I spent time face to face with customers from 8:00 AM to 3:00 PM every day, then we assembled and installed lifts into the wee hours every evening,” reflects Peterson, “We normally closed shop around 10:00 PM.”

Peterson’s team joined the PALFINGER Group in 2007 and a few years later rebranded into their name today: Palfinger Liftgates. They expanded again by the end of 2009 when the state-of-the-art facility in Council Bluffs, IA began manufacturing ILT, ILM and ILD models. What began as a 2-person operation has grown into a leading company with more than 150 PALFINGER employees today, collectively working in Cerritos, CA, Trenton, NJ, Council Bluffs, IA and Germany to satisfy the needs across North America. “I have been blessed with having many long term associates in the company,” reflects Peterson, “We are close to 10 that have been here for 20 or 20+ years and another big group at 15+ years.” Of these long term employees, there are three in particular that have been with Peterson for 24 years: Craig Lopshire, Jesus DeLaCruz and Salvador Martin.

Over the years, Palfinger Liftgates has done business with all the major Studios in Los Angeles including Paramount, Warner Bros, Universal Studios, Disney, 20th Century Fox, Sony and many local and national Studio rental fleets. The Studios remain an important customer, but the overall growth has come from many other segments of the market. For example, today Palfinger Liftgates is a major supplier for many Nationwide fleets specializing in truck rental, food and beverage distribution, construction and general freight. To meet the demands of their growing customer segments, the range of liftgates offered in the US grew significantly as well. Palfinger Liftgates now offers a comprehensive range of Folding Lifts, Rail Lifts, Cantilever Lifts, Cargo Van Lifts, Slider Lifts and Special Application Lifts. “The rapid growth of our customer base was fueled by our ability to supply very innovative and user friendly products coupled with low operational ownership costs,” says Peterson.

REFLECTING BACK & LOOKING AHEAD

Looking back at his career at MBB and now Palfinger, Peterson says that the last 25 years have not only been a great ride, but also a continuation of his upbringing. He still enjoys the mechanics of equipment, just as he did growing up, and is constantly driven to improve components and processes. “I attack an application or liftgate piece by piece, or process by process, always from the standpoint of how we can make it better or more affordable for the customer,” says Peterson, “This is how we have been able provide high quality and overall value to our customers for the last 25 years.” Peterson is proud of how his Palfinger Liftgates has set and raised standards in the North American liftgate industry. “Our inventions have made a difference for many fleets and operators, and today, we are still the best in the market,” he says, “Maybe someone else has more market share, but we continue to provide great products while leading in innovation and low operational costs, which at the end provides great value for our customers.” Looking forward, the future of Palfinger Liftgates is based on a simple philosophy: strive to be better than yesterday. With a passionate leader and group of proud and loyal employees, Palfinger Liftgates will continue to provide great product solutions, service and overall value for their customers. The company looks forward to officially celebrating their 25th anniversary at the 2018 NTEA Work Truck Show, followed by an open house celebration in Cerritos, CA. 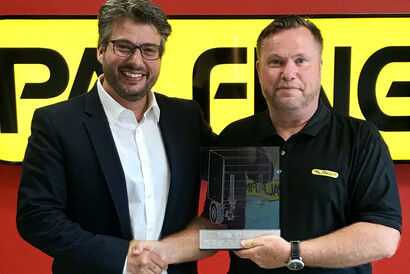 About the PALFINGER North America Group: